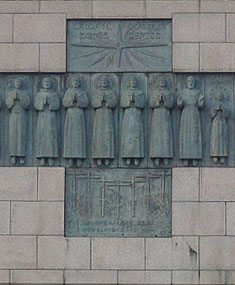 Franciscan martyr in Japan. Born near Avila, Spain, he became a Franciscan in 1567 and was sent first to Mexico and then to the Philippines in 1583. Ten years later he was ordered to Japan where he worked as commissary for the order in the islands. Arrested by officials, he and twenty six others were all crucified near Nagasaki at the order of the Taiko Toyotomi Hideyoshi who had launched the persecution of the Christians in Japan. Canonized in 1862, Peter and the others are called the Martyrs of Japan.