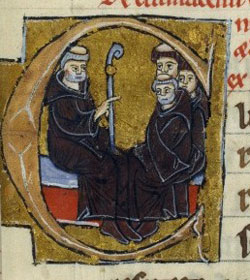 Abbot of Cluny, also known as Peter of Montboissier and called "the Venerable" owing to his holiness and wisdom. Born into a French noble family, he entered the Congregation of Cluny and held a number of posts in several houses until his election in 1122 as eighth abbot of Cluny. Peter brought a variety of reforms to the educational system of the order and to its finances, using two general chapters to win approval of his constitution. His support of education caused a controversy with his friend St. Bernard of Clairvaux, who desired the monastic life to be one of prayer and labor: On behalf of his order, Peter traveled extensively, going six times to Rome and to England and Spain. In between these journeys, Peter retired to a hermitage to pray and study. To assist the conversions of Muslims, Peter made the then unprecedented suggestion that the Koran be translated into Latin. He also authored treatises against the heretical priest Peter de Bruys and the Jews, as well as poems and sermons; his writings reveal a deep knowledge of Scripture. Peter also gave sanctuary to Peter Ahelard after his condemnation by the Council of Sens in 1140. While never formally canonized, he has long been venerated as a blessed.