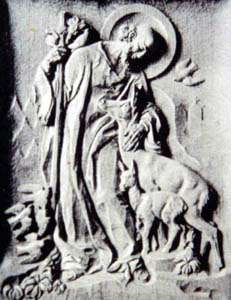 Gunther was a nobleman related to Emperor St. Henry. He led a worldly life until he was fifty when he was convinced by St. Gothard, then reforming Hersfeld monastery, to make up for his sinful life by becoming a monk there. He gave most of his wealth to endow Hersfeld, went on a pilgrimage to Rome, and then became a monk at Niederaltaich, Bavaria, of which Gothard was abbot. Meanwhile, at the time he had endowed Hersfeld, he also endowed and owned the abbey of Gollingen in Thuringia, and he now insisted on being its abbot. He was an unsuccessful abbot and incurred the enmity of the monks there. He was persuaded to resign and return to Niederaltaich by Gothard. In 1008, he became a hermit in Lalling Forrest, attracted disciples, and then built a hermitage near Rinchnac, Bavaria, which developed into a monastery. He died at Hartmanice, Bohemia, on October 9th. He is revered for his holiness and austerity, his eloquent preaching, and his gift of infused knowledge. His feast day is October 9th.