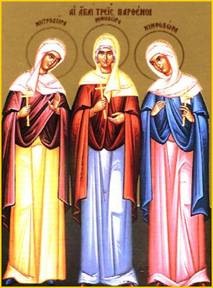 Martyr with her sisters, Metrodora and Nymphodora. They were orphans of Bithynia, in Asia Minor, who were denounced as Christians and taken before the local Roman governor, named Fronto. They refused to worship the pagan gods, and Menodora was beaten to death, as was Nymphodora. Metrodora was tortured, burned, and beheaded.

Prayer To Her St. Therese