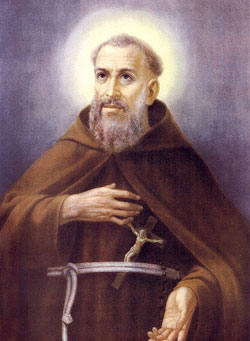 Born at Acri, Italy, he was refused admission to the Capuchins twice but was accepted on his third attempt in 1690, and was ordained. Unsuccessful in his first sermons, he eventually became a famous preacher after a tremendous success preaching in Naples during Lent in 1711. For the rest of his life, he preached missions in Calabria and Naples, converting thousands and performing many miracles of healing. He was reputed to have had the gifts of prophecy and bilocation, experienced visions and ecstasies and was a sought after confessor with the ability to see into men's souls. He died in the friary at Acri on October 30, and was beatified in 1825.