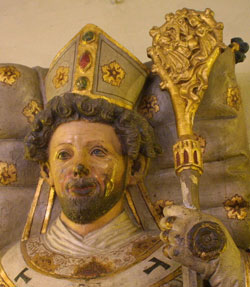 Bishop and Apostle of Pomerania. Born in Swabia, to a noble family, he served Emperor Henry IV in various posts, including that of chancellor. However, Otto was not in favor of Henry's policies toward the Holy See, in particular his insistence of rights of investiture. Thus, when Otto was appointed bishop of Bamberg in 1103, he refused to be consecrated until receiving approval from Pope Paschal II who consecrated him in 1106. Otto was a figure in the reconciliation of the pope and Emperor Henry V. At the behest of King Boleslav III of Poland, Otto headed a missionary effort to Pomerania where he found considerable success in making converts among the local inhabitants. In honor of his work, he is known as the Apostle of Pomerania. He died in Bamberg on June 30. He was canonized in 1189.