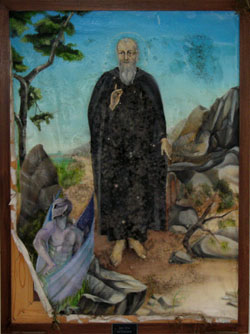 Abbot Born in Calabria, southern Italy, to Greek parents, he spent a dissolute youth until deciding to enter the Basilian order after his mistress and their child died when he was about thirty years old. After living as a hermit for a time, he took up residence in several communities and finally was elected abbot over San Demetrio Corone. In 981, marauding Saracens threatened southern Italy, and Nilus fled with his monks to Monte Cassino. After spending fifteen years in the monastery of Vallelucio which had been given to the monks for their use, he founded a new community at Serpero. Later he received a grant of land from Count Gregory of Tusculum and so established the community which became the Monastery of Grottaferrata under Nilus' disciple St Bartholomew. Nilus died at Frascati on December 27.