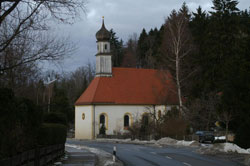 Roman martyr, also called Cyrinus. He was mentioned in the legendary Acts of Sts. Mans and Martha as being buried in the Catacomb of Pontian. His name, however, is not listed on the itineraries to the graves of the Roman martyrs. In the eighth century, his relics were translated to the Benedictine abbey of Tegernsee in Bavaria.