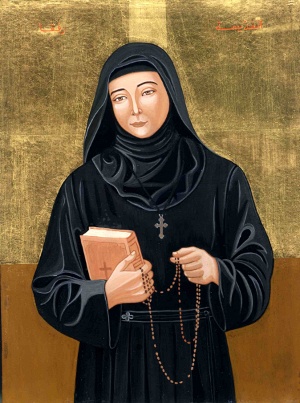 Saint Rafqa, also know as Saint Rebecca, was born in Hemlaya, Lebanon on June 29, 1832. She was the only child of her parents, Saber El-Choboq El-Rayess and Rafqa Gemayel. She was baptized on July 7, 1832 and named Boutroussieh.

Her parents were devout Christians and taught her daily prayers. By all accounts, her childhood was happy and simple, until she was just 7 years old and her mother, Rafqa (for whom she was named) died.

The death of her mother started a period of tribulation for Rafqa and her father, who soon experienced financial difficulties. Rafqa was sent to work as a domestic servant for four years to help support the family. During that period, she worked in Damascus, away from her father.

In 1847, she returned to find that her father had remarried and his new wife desired that Rafqa marry her brother. At the same time, an aunt wanted to arrange a marriage between Rafqa and her cousin.

Rafqa was left to decide what to do with herself, split between two potential suitors and under pressure from family to make two different choices. She turned to prayer and asked God to guide her. Her answer surprised everyone. Rafqa would marry neither man, but instead would devote her life to Jesus and become a nun.

Rafqa traveled to the convent of Our Lady of Deliverance in Bikfaya. She joined the Mariamettes, founded by Fr. Jospeh Gemayel.

According to legend, when she entered the convent and gazed upon the icon of Our Lady of Deliverance, she heard the voice of God tell her "You will become a nun."

The Mother Superior of the convent accepted her immediately, without question. Shortly thereafter, her father and his new wife arrived to try to dissuade Rafqa from her God-chosen path. She refused to leave and remained devoted to her vocation.

She was sent to Deir El Qamar to teach catechism. The town became the site of civil unrest and on one occasions he reportedly saved a child from murder by hiding him under her robes.

She served in Deir El Qamar for a year.

In 1861, she returned to her congregation and become a novice. On March 19, 1862, she took her temporary vows and was assigned to kitchen service in a seminary.

Rafqa spent her free time learning Arabic, writing, and arithmetic. She also helped convince other girls to join the congregation. In 1863, she continued working as a teacher, first at a school belonging to her congregation in Byblos, then Maad village where she and a fellow sister established a new school for girls.

Following this early period, Rafqa repeatedly heard messages from heaven. When her order faced a crisis, god told her "You will remain a nun." And she heard the voices of saints directing her to enter the Lebanese Maronite Order. She obeyed.

Sister Rafqa took her solemn vows in the new order on Augist 25, 1872.

During her time, she was known to be quiet and contemplative. She was devoted to prayer and spoke little. She commonly made sacrifices and lived in great austerity.

In October 1885, Sister Rafqa made an unusual request of Jesus, asking to share in his suffering. She immediately began to experience pain in her head, which moved to her eyes. Her superior was concerned about Rafqa's pain and ordered that she be examined by doctors and sent to Beirut for treatment.

As she passed through the nearby church in Byblos, the congregation made note that an American doctor was in the area. The located the doctor who recommended immediate surgery for Sister Rafqa.

During the surgery, she refused anesthesia, and the doctor made a mistake which caused her eye to emerge from its socket and fall to the floor. Sister Rafqa, instead of panicking, blessed the doctor, saying "For Christ's passion, god bless your hands and may God repay you."

The surgery did not succeed. Shortly thereafter, pain entered her left eye.

For the next 12 years, she experienced pain in her remaining eye and headaches. At no point did she reverse her wish to share in Christ's suffering. Instead, she remained joyful in prayer and patient in her suffering. She remained quiet for long periods, speaking infrequently, but always joyously.

In 1887, Sister Rafqa was sent with five other sisters to found a new monastery in Jrabta, Batroun in Lebanon. She did as she was asked, working patiently and diligently as she was able despite her suffering. In 1899, she became blind and paralysis set in.

Eventually she was confined to bed, mostly paralyzed and only able to lie on her right side. Her body withered, but her hands remained capable, and she used them to knit socks. A wound developed in left shoulder, which she referred to as "the wound in the shoulder of Jesus." This continued for seven years.

On March 23, 1914, she received her last communion and called upon Jesus and the Holy Family, then went to her reward in Heaven.

After she was buried in the monastery cemetery, a light appeared on her grave for three consecutive light and was witnessed by many.

In 1925, a case for her beatification was opened in the Vatican and the investigation into her life began in the year following.

In 1927, her grave was exhumed and she was reburied in the monastery church.