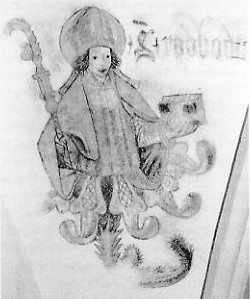 Benedictine bishop. The great grandson of the last pagan King of Friesland, Holland, Radbod was given an education as a Christian by his uncle Gunther, Bishop of Cologne, Germany, and became bishop of Utrecht, Holland, in 900. As all of is predecessors had belonged to the order, Radbod immediately entered the Benedictines and found this affiliation helpful in administrating his diocese, in which the Benedictine influence was most keenly felt. As bishop, he also distinguished himself for his aid to the poor and for his poetry. He died at Deventer, France, where he had been forced to move his see after an invasion by the Danes.