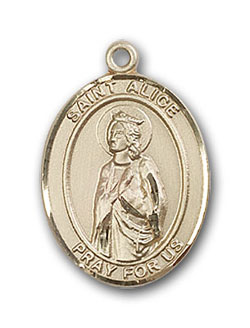 Alice was born at Shaerbeck, near Brussels. At the age of seven, she entered a Cistercian convent named Camera Sanctae Mariae, and she remained there for the rest of her life. The Cistercian community was inspired by her spirit of humility. However, at an early age, she contracted leprosy and had to be isolated. The disease caused Aleydis intense suffering, and eventually she became paralyzed and was afflicted with blindness. Alice's greatest consolation came from reception of the Holy Eucharist, although she was not allowed to drink from the cup because of the danger of contagion. However, the Lord appeared to her with assurance that to receive under one species, was sufficient. Known for visions and ecstasies, she died in 1250. Devotion to her was approved in 1907 by Pope Pius X.

There is much sickness and related suffering in the world today. Like St. Alice, we must try to turn our suffering into good and pray that God will give us the strength to endure and that we may be consoled through the reception of the Sacraments.