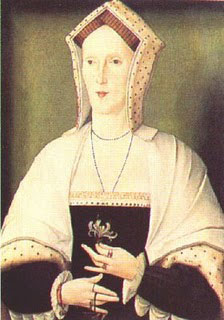 Martyr of England. She was born Margaret Plantagenet, the niece of Edward IV and Rich­ard III. She married Sir Reginald Pole about 1491 and bore five sons, including Reginald Cardinal Pole. Margaret was widowed, named countess of Salisbury, and appointed governess to Princess Mary, daughter of Hemy VIII and Queen Catherine of Aragon, Spain. She opposed Henry's mar­riage to Anne Boleyn, and the king exiled her from court, although he called her "the holiest woman in England." When her son, Cardinal Pole, denied Henry's Act of Supremacy, the king imprisoned Margaret in the Tower of London for two years and then beheaded her on May 28. In 1538, her other two sons were executed. She was never given a legal trial. She was seventy when she was martyred. Margaret was beatified in 1886.