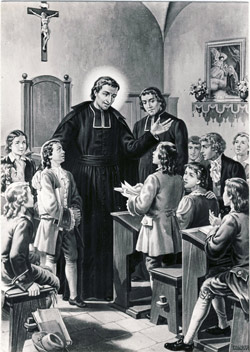 Confessor, Marian devotee, and founder of the Sisters of Divine Wisdom He was born Louis Maie Grignon in Montfort, France, in 1673. Educated at Rennes, he was ordained there in 1700, becoming a chaplain in a hospital in Poitiers. His congregation, also called the Daughters of Divine Wisdom, started there. As his missions and sermons raised complaints, Louis went to Rome, where Pope Clement XI appointed him as a missionary apostolic. Louis is famous for fostering devotion to the Blessed Virgin Mary and the Rosary. In 1715, he also founded the Missionaries of the Company of Mary. His True Devotion to the Blessed Virgin remains popular. Louis died at Saint-Laurent-sur-Sevre. He was canonized in 1947.