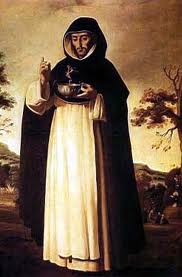 Louis was born in Valencia Spain, in a family of nine children. His good parents brought him up well, and he became a Dominican priest. He was very severe as a master of the novices, but even though he did not have a good sense of humor, he taught the novices to give themselves completely to God. When first he began to preach, it did not seem as though he would be very successful, but his deep love for souls brought great results. At the age of thirty-six, St. Louis left for South America. He stayed in the New World only about six years, but in that short time, this great apostle baptized thousands of persons. Although he knew only Spanish, God gave him the gift of tongues, so that when he spoke, all the different tribes of Indians understood him. Yet his apostolate was not without dangers. A tribe called the Caribs of the Leeward Islands even tried to poison the saint when he visited them to preach the gospel of Our Lord. Once he was called back to Spain, St. Louis trained other preachers, teaching them to prepare themselves by fervent prayer, first of all. The last two years of his life were full of painful sufferings, but still he kept preaching. Finally he was carried from the pulpit to his bed, and he never left it again, for he died eighteen months later. His feast day is October 9.