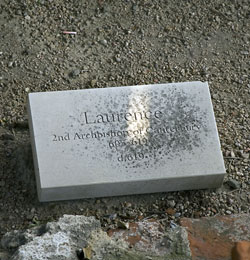 Archbishop of Canterbury, England, sent there by Pope St. Gregory I the Great. A Benedictine, Lawrence accompanied St. Augustine to Canterbury in 597 and succeeded him as archbishop in 604. When the Britons lapsed into pagan customs, Lawrence planned to return to France, but in a dream he was rebuked by St. Peter for abandoning his flock. He remained in his see and converted the local ruler King Edbald to the faith. He died in Canterbury on February 2. Lawrence is commemorated in the Irish Stowe Missal and is reported to have been scourged by St. Peter in his dream, carrying the physical scars on his back.