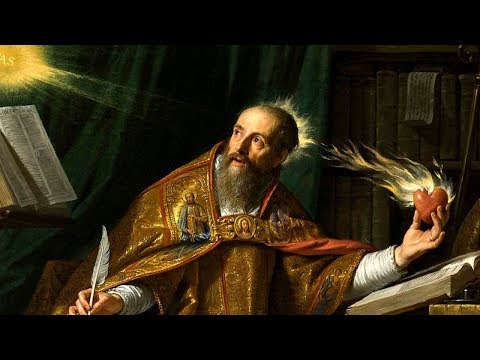 St. Augustine of Hippo is the patron of brewers because of his conversion from a former life of loose living, which included parties, entertainment, and worldly ambitions. His complete turnaround and conversion has been an inspiration to many who struggle with a particular vice or habit they long to break.

This famous son of St. Monica was born in Africa and spent many years of his life in wicked living and in false beliefs. Though he was one of the most intelligent men who ever lived and though he had been brought up a Christian, his sins of impurity and his pride darkened his mind so much, that he could not see or understand the Divine Truth anymore. Through the prayers of his holy mother and the marvelous preaching of St. Ambrose, Augustine finally became convinced that Christianity was the one true religion. Yet he did not become a Christian then, because he thought he could never live a pure life. One day, however, he heard about two men who had suddenly been converted on reading the life of St. Antony, and he felt terrible ashamed of himself. "What are we doing?" he cried to his friend Alipius. "Unlearned people are taking Heaven by force, while we, with all our knowledge, are so cowardly that we keep rolling around in the mud of our sins!"

Full of bitter sorrow, Augustine flung himself out into the garden and cried out to God, "How long more, O Lord? Why does not this hour put an end to my sins?" Just then he heard a child singing, "Take up and read!" Thinking that God intended him to hear those words, he picked up the book of the Letters of St. Paul, and read the first passage his gaze fell on. It was just what Augustine needed, for in it, St. Paul says to put away all impurity and to live in imitation of Jesus. That did it! From then on, Augustine began a new life.

He was baptized, became a priest, a bishop, a famous Catholic writer, Founder of religious priests, and one of the greatest saints that ever lived. He became very devout and charitable, too. On the wall of his room he had the following sentence written in large letters: "Here we do not speak evil of anyone." St. Augustine overcame strong heresies, practiced great poverty and supported the poor, preached very often and prayed with great fervor right up until his death. "Too late have I loved You!" he once cried to God, but with his holy life he certainly made up for the sins he committed before his conversion. His feast day is August 28th. 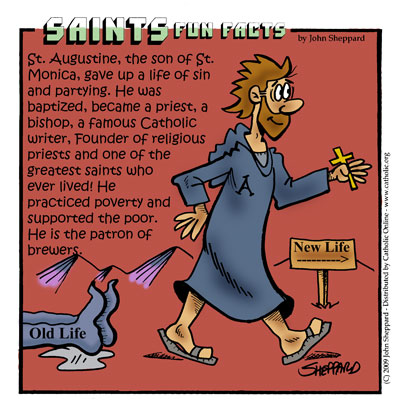