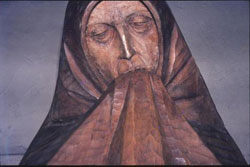 Blessed Yvette has not been canonized, but she is considered a saint. Blessed Yvette (Jutta of Huy), Widow (Feast day - January 13) Endowed with extraordinary charisms, Yvette was a product of the development of mysticism in the Low Countries in the thirteenth century. In this she joined a select number of young women Christians such as Juliana of Cornillion, Eve of St. Martin, Isabel of Huy, Mary of Oingnies, Ida of Leau, Ida of Nivelles, Ida of Loviano, Christiana of St.-Trend, Lutgard of Tongres, and Margaret of Ypres.

She was born of a wealthy family of Huy near Liege in 1158 and when very young was married off by her parents. Five years and three children later, she was a widow at the youthful age of eighteen. There was no dearth of suitors, drawn by her uncommom beauty, but Yvette would have none of them. She dedicated herself for eleven years to caring for lepers out of surpassing love for God.

For the last thirty-six years of her life, the holy woman lived as an anchoress and had many mystical experiences. Her prayers and miracles made her famous. She succeeded in bringing her father and one of her two remaining children back to the Faith and solicitously aided the countless people who flocked to consult her in her hermitage. She died on January 13, 1228.