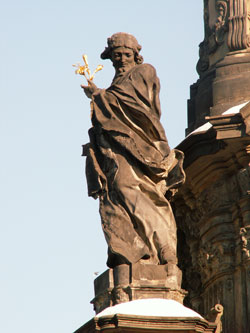 Martyred foe of the Hussites. He was born on December 20 at Skotschau, in Austrian Silesia, and educated at Prague. He was ordained in 1607 and served in various parishes, defending the faith against the Hussites. In 1618, at the start of the Thirty Years' War, the Protestants seized the local government. Two years later, Jan was taken prisoner at Olmutz and was tried by the Hussites. He was racked and tortured and died on March 17. He was canonized in 1995 by Pope John Paul II.