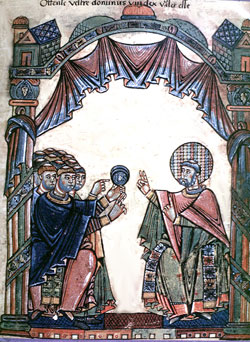 Albinus, also known as Aubin, entered the monastery of Tincillac when a youth, was elected Abbot when he was thirty-five, and was named Bishop of Angers in 529. He was known for his generosity to the sick and the indigent, widows, and orphans, for his work in ransoming slaves, and for his holiness and the many miracles he is reputed to have performed both during his lifetime and after his death. His feast day is March 1.