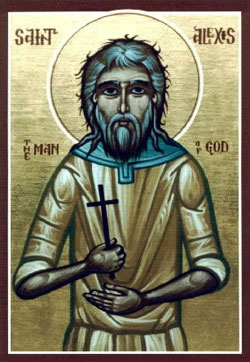 Alexis was the only son of a rich Roman senator. From his good Christian parents, he learned to be charitable to the poor. Alexis wanted to give up his wealth and honors but his parents had chosen a rich bride for him. Because it was their will, he married her. Yet right on his wedding day, he obtained her permission to leave her for God. Then, in disguise, he traveled to Syria in the East and lived in great poverty near a Church of Our Lady. One day, after seventeen years, a picture of our Blessed Mother spoke to tell the people that this beggar was very holy. She called him "The man of God." when he became famous, which was the last thing he wanted, he fled back to Rome. He came as a beggar to his own home. His parents did not recognize him, but they were very kind to all poor people and so they let him stay there. In a corner under the stairs, Alexis lived for seventeen years. He used to go out only to pray in church and to teach little children about God. The servants were often very mean to him, and though he could have ended all these sufferings just by telling his father who he was, he chose to say nothing. What great courage and strength of will that took! After Alexis died, his family found a note on his body which told them who he was and how he had lived his life of penance from the day of his wedding until then, for the love of God.

Today, we humbly ask you to defend Catholic Online's independence. 98% of our readers don't give; they simply look the other way. If you donate just $5.00, or whatever you can, Catholic Online could keep thriving for years. Most people donate because Catholic Online is useful. If Catholic Online has given you $5.00 worth of knowledge this year, take a minute to donate. Show the volunteers who bring you reliable, Catholic information that their work matters. If you are one of our rare donors, you have our gratitude and we warmly thank you. Help Now >
Continue reading about St. Alexis