Feastday: May 23
Patron: Corsica, Livorno, torture victims, and pathologies of the hand and the feet 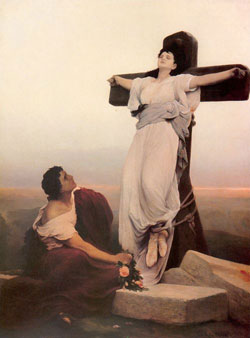 St. Julia of Corsica, also known as St. Julia of Carthage or St. Julia of Nonza, was born to noble, aristocratic parents in Carthage. Overtime, Carthage was subject to many barbaric attacks, weakening the city's defenses.

During an attack by Gaiseric, King of the Vandals, Julia was taken from her family and sold into slavery. She was purchased by a pagan merchant of Syria, named Eusebius.

Even during the most daunting chores, Julia never complained or felt sorry for herself. By being patient and cheerful, Julia was able to find comfort in her place in the world. Julia passionately loved God. When she was not working under her master's commands, Julia devoted her time toward praying and reading books of piety.

Eusebius, charmed by Julia's commitment and devotion, felt it was right to bring her along with him during his journey to Gual, where France now stands. Upon reaching the northern part of an island then called Corisca, he anchored his ship to join a pagan idolatrous festival.

Julia was left on her own some distance away from the festival, because she refused to be defiled by the "superstitious ceremonies" she openly hated.

The governor of the island, Felix, was a narrow-minded pagan who needed to have things his way. He noticed Julia outside of the festival and felt she was "insulting the gods." Eusebius informed Felix that Julia was a Christian and that despite his authority over her, she would not renounce her religion. Eusebius explained he could not bare parting with Julia because she was so diligent and faithful in her work for him.

Felix would not accept this. He offered Eusebius four of his best female slaves in exchange for Julia. Eusebius replied, "No; all you are worth will not purchase her; for I would freely lose the most valuable thing I have in the world rather than be deprived of her."

Not content, Felix prepared a banquet and waited until Eusebius became intoxicated and fell into a deep sleep to make his next move.

Felix found Julia alone and unprotected. He tried to get her to sacrifice to his gods. He told her he would grant her freedom if she would obey. Julia refused to deny Christ.

"My freedom is to serve Christ," she said, "whom I love every day in all the purity of my soul."

Enraged by her response, Felix had Julia struck in the face and her hair torn from her head. Still, during her torture, Julia continued to confess her faith. Finally, he had her hanged on a cross until she died.

Her body was carried off by monks of the isle of Gorgon, but in 763, the King of Lombardy, Desiderius, had her relics moved to Brescia, a city in the northern Italian region of Lombardy where the memory of St. Julia is celebrated with great devotion.

St. Julia is often depicted with the palm of martyrdom and the crucifix. She is the patron saint of Corsica, Livorno, torture victims, and pathologies of the hand and the feet. Her feast day is celebrated on May 23.