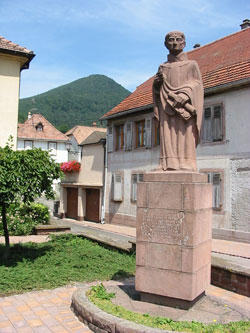 Abbot of St. Denis Abbey near Paris, France, and a counselor of King Pepin  and Charlemagne. Born in Alsace, Fulrad became abbot in 750. He served Pepin, Carloman, and Charlemagne. In 750, with St. Burchard, Fulrad secured the approval of Pope St. Zachary for the accession of Pepin as king of the Franks. In 756, Fulrad aided Pepin in surren­dering Ravenna, Italy, to the Holy See. Fulrad also guided the Franks in establishing close ties with the Holy See rather than Byzantium.