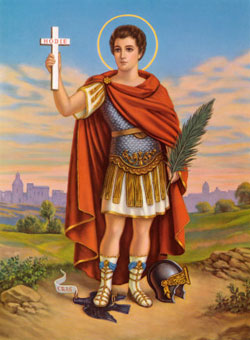 At one time there was much talk of a Saint Expeditus, and some good people were led to believe that, when there was need of haste, petitioning Saint Expeditus was likely to meet with prompt settlement. However, there is no adequate reason to think that any such saint was ever invoked in the early Christian centuries; in fact it is more than doubtful whether the saint ever existed. In the "Hieronymianum" the name Expeditus occurs among a group of martyrs both on the 18th and 19th of April, being assigned in the one case to Rome, and in the other to Melitene in Armenia; but there is no vestige of any tradition which would corroborate either mention, whereas there is much to suggest that in both lists the introduction of the name is merely a copyist's blunder. Hundreds of similar blunders have been quite definitely proved to exist in the same document.

There is also a story which pretends to explain the origin of this "devotion" by an incident of modern date. A packing case, we are told, containing a body of a saint from the catacombs, was sent to a community of nuns in Paris. The date of its dispatch was indicated by the use of the word "spedito", but the recipients mistook this for the name of the martyr and set to work with great energy to propagate his cult. From these simple beginnings, it is asserted, a devotion to St. Expeditus spread rapidly through many Catholic countries. It should be pointed out that though the recognition of St. Expeditus as the patron of dispatch depends beyond doubt upon a play upon words - still the particular story about the Paris nuns falls to pieces, because as far back as 1781 this supposed martyr, St. Expeditus, was chosen patron of the town of Acireale in Sicily, and because pictures of him were in existence in Germany in the eighteenth century which plainly depicted him as a saint to be invoked against procrastination.

St. Theresa - Pick Me A Rose