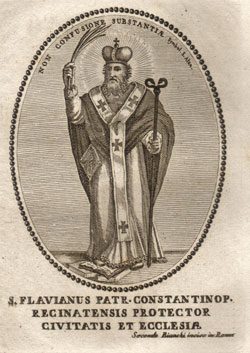 Patriarch of Constantinople from 446 or 447, succeeding St. Proclus. Refusing to give Em­peror Theodosius II a bribe upon becoming patriarch and making the emperor's sister Pulcherius a deaconess, Flavian received hostile treat­ment from the imperial court. Flavian also started the condemnation of Eutyches, who began the heresy of Monophysitism. This led to his being deposed and exiled at the so-called "Robber Synod" at Ephesus in 449, whereupon the famous "Tome" of dogmatic letters of Pope Leo I the Great was ignored. Appealing to the Pope, Flavian was beaten so mercilessly that he was mortally wounded and died three days later in exile. He was proclaimed a saint and martyr by the Council of Chalcedon in 451.