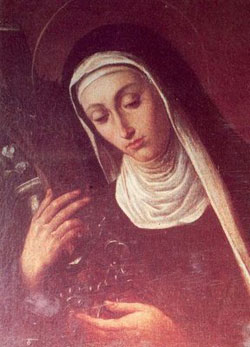 Foundress and Poor Clare. She was born circa 1435, the daughter of Countess Matilda Carafata, at Messina, Sicily. Betrothed, Eustochium lost her fiance before they could wed. When her father died in 1446, she became a Poor Clare at Bascio convent and devoted herself to penance and charitable activities. Her mother and sister were at Monte Vergine Convent, and Eustochium went there for the stricter observances. She became abbess in 1462. She was canonized in 1988. In some lists her name is Eustachia or Smaragda.