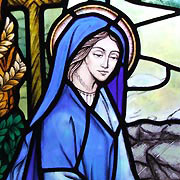 According to legend, she was the daughter of a wealthy resident of Tegeingl, Flintshire, Wales, and the sister of St. Beuno. She was most impressed by Beuno, was supposedly beheaded on June 22 by one Caradog when she refused to submit to him, had her head restored by Beuno, and sometime later, became a nun of the convent of a double monastery at Gwytherin in Denbigshire. She succeeded an Abbess Tenoy, as Abbess and died there fifteen years after her miraculous restoration to life. A spring supposedly springing up where Winifred's head fell, is called Holy Well or St. Winifred's Well and became a great pilgrimage center where many cures have been reported over the centuries. She is also known as Gwenfrewi. Her feast day is November 3.