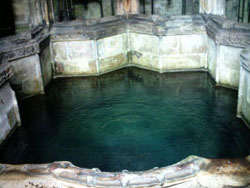 Winifred + Virgin and martyr, also called Winefride, Gwenfrewi, and Guinevra. According to tradition, she was born in Wales and was a niece of St. Beuno. While it is probable that Winifrid was an actual person, she is known entirely through legend and tales. The most common declares her to have been murdered on June 22, by Caradog of Hawarden, after refusing his advances. He beheaded her, and from the spot where her head hit the ground sprang up water, to become the Holy Well, one of the most popular pilgrim sites in Wales. In another version, she was miraculously healed by Beuno and, with her head restored to her body, she became a nun and later abbess of the nunnery of G'yytherin in Ciwyd. The Holy Well, or St. Winifred's Well, was still honored and visited after the Reformation, while her relics were enshrined at Shrewsbury.