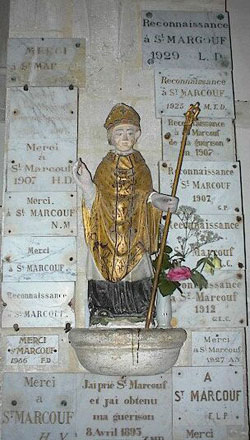 Marculf is also known as Marcoul. He was born at Bayeux, Gaul, at noble parents. He was ordained when he was thirty, and did missionary work at Coutances. Desirous of living as a hermit, he was granted land by king Childebert at Nanteuil. He attracted numerous disciples, and built a monastery, of which he was abbot. It became a great pilgrimage center after his death on May 1. St. Marculf was regarded as a patron who cured skin diseases, and as late as 1680, sufferers made pilgrimages to his shrine at Nanteuil and bathed in the springs connected with the church. His feast day is May 1.