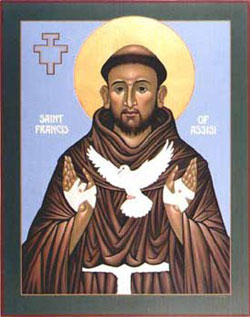 It must be confessed that many of the incidents recorded in the life of Blessed Gonzalo (Gundisalvus), a Portuguese of high family, are not of a nature to inspire confidence in the sobriety of his biographers judgment. At the very outset we are told that when carried to the font the infant fixed his eyes on the crucifix with a look of extraordinary love. Then, when he had grown up and been ordained a priest, he is said to have resigned his rich benefice to his nephew and to have spent fourteen years upon a pilgrimage to the Holy Land. On his return, being repulsed by his nephew, who set the dogs on him as a vagrant, he was supernaturally directed to enter that Order in which the Office began and ended with the Ave Maria. He accordingly became a Dominican, but what was allowed by his superiors to live as a hermit, during which time he built, largely with his own hands, a bridge over the river Tamega. When the laborers whom he persuaded to help him had no wine to drink, and he was afraid that they would go on strike, he betook himself to prayer; and then, on his hitting the rock with his stick, an abundant supply of excellent wine spouted forth from a fissure. Again, when provisions failed, he went to the riverside to summon the fishes, who came at his call and jumped out of the river, competing for the privilege of being eaten in so worthy a cause. Similarly, we read that "when he was preaching to the people, desiring to make them understand the effects of the Church's censures upon the soul, he excommunicated a basket of bread, and the loaves at once became black and corrupt. Then, to show that the Church can restore to her communion those who humble acknowledge their fault, he removed the excommunication, and the loaves recovered their whiteness and their wholesome savor". It is to be feared that legend has played a considerable part in filling in the rather obscure outlines of the biography. Blessed Gonzalo died on January 10, but his feast is kept on this day by the Dominicans, his cultus having been approved in 1560. His feast day is January 17th.