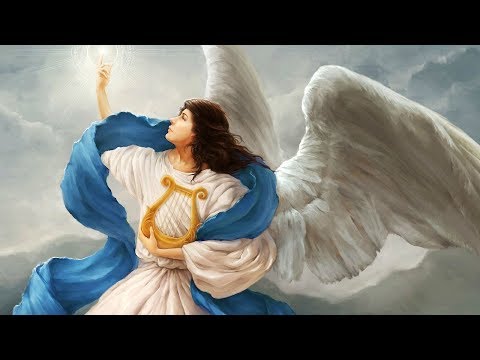 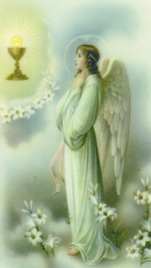 St. Gabriel is an angel who serves as a messenger for God to certain people. He is one of the three archangels. Gabriel is mentioned in both the Old and the New Testaments of the Bible. First, in the Old Testament, Gabriel appears to the prophet Daniel to explain his visions. Gabriel is described as, "one who looked like man," as he interprets Daniel's visions. He speaks to Daniel while he is sleeping. After Gabriel's first visit, Daniel becomes tired and sick for days. Gabriel later visits Daniel again providing him with more insight and understanding in an answered prayer.

In the New Testament, Gabriel, described as "an angel of the Lord," first appears to Zacharias, the father of John the Baptist. He tells him, "Fear not, Zacharias: for thy prayer is heard; and thy wife Elisabeth shall bear thee a son, and thou shalt call his name John. And thou shalt have joy and gladness; and many shall rejoice at his birth." Luke 1:13.

After Elizabeth conceived and was six months pregnant, Gabriel appears again. The Book of Luke states he was sent from God to Nazareth to visit the virgin married to a man named Joseph. Gabriel said to Mary, "Hail, thou that art highly favoured, the Lord is with thee: blessed art thou among women." Luke 1:28.

"Fear not, Mary: for thou hast found favour with God.
31 And, behold, thou shalt conceive in thy womb, and bring forth a son, and shalt call his name JESUS.
32 He shall be great, and shall be called the Son of the Highest: and the Lord God shall give unto him the throne of his father David:
33 And he shall reign over the house of Jacob for ever; and of his kingdom there shall be no end." Luke 1:30-33

Gabriel told Mary she would conceive from The Holy Ghost and the baby will be the Son of God.

After the Annunciation of Mary, Gabriel is not spoken of again.

He is occasionally cited as the one who blows God's trumpet to indicate the Lord's return to Earth. However, the person designated with this task varies; different passages cite different people. The earliest known identification of Gabriel as the trumpet holder comes in 1455 represented in Byzantine art.

Gabriel is recognized as the patron saint of messengers, telecommunication workers, and postal workers. His feast day is celebrated on September 29, along with St. Michael and St. Raphael.