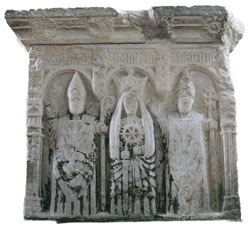 Irish hermit and bishop, also called Carthage, Cuda, or Mochuda. Originally a swineherd, Carthach was ordained and then became a hermit about 590 in Kiltulagh and then in Bangor, under St. Comgall. Carthach traveled to Offaly, where he founded a monastery, ruling more than eight hundred monks. He wrote a rule for the monastery in metrical verse, a document that is extant. He is believed to have served as the bishop of Fircall until he and his monks were expelled by some local lord. Carthach founded another monastery at Lismore on the banks of the Blackwater, and lived in a nearby cave. He died on May 14.