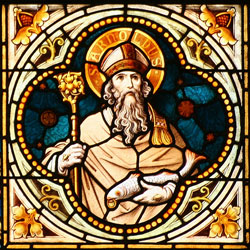 Artaldus (also called Arthaud) was born in the castle of Sothonod in Savoy. At the age of eighteen, he went to the court of Duke Amadeus III, but a year or two after, he became a Carthusian at Portes. After many years, being a priest and an experienced and holy religious, he was sent by the prior of the Grande Chartreuse to found a charterhouse near his home, in a valley in the Valromey significantly called "the cemetery". Here Artaldus established himself with six of his brethren from Portes. The community was no sooner well settled down, than there buildings were destroyed by fire, and St. Artaldus had to begin all over again. He chose a fresh site on the Arvieres River, and his second foundation was soon built and occupied. But a Carthusian cell could not contain the ever-increasing reputation of Artaldus: like his master St. Bruno, he was consulted by the Pope, and when he was well over eighty, he was called from his monastery to be bishop of Belley, in spite of his vehement and reasonable protest. However, after less than two years of episcopate, his resignation was accepted, and he thankfully returned to Arvieres, where he lived in peace for the rest of his days. During his last years, he was visited by St. Hugh of Lincoln, who had come into France, and who, while he was prior of the charterhouse of Witham, had induced Henry II to become a benefactor of Arvieres. The Magna vita of St. Hugh records a gentle rebuke administered by Hugh when Artaldus asked him for political news in the presence of the community who had turned their backs upon the world to give themselves entirely to God. The cultus of St. Artaldus, called simply Blessed by the Carthusians, was confirmed for the diocese of Belley in 1834. He was 105 years old when he died and his feast day is October 7th. 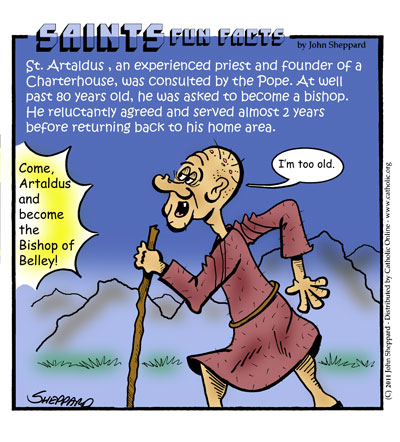