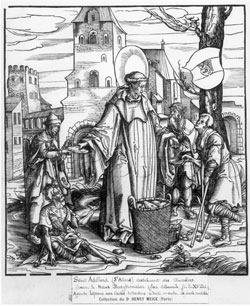 
Adelard was the grandson of Charles Martel, nephew of King Pepin and first cousin to Charlemagne. He became a monk at Corbie in Picardy in 773. Eventually he was chosen abbot, and became Charlemagne's counselor. He was forced by the king to quit the monastery and work for him as chief minister for his son Pepin. He was accused of supporting a rival power (Bernard) against Emperor Louis the Debonair and was banished to a monastery on the island of Heri. Five years later he was recalled to the king's court (821). He later retired to the Abbey at Corbie and died January 2 after an illness. Miracles were reported after his death. When Adelard first became monk at Corby in Picardy (in 773), his first assignment was gardener of the monastery. He did his job humbly and piously, praying throughout the day. His great virtues eventually helped him become Abbot.