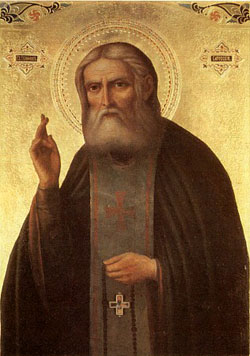 Russian monk and mystic who received the high honorific title of starets (meaning in Russian, spiritual teacher). Born to a middle class family at Kursk, he was originally named Prokhor Moshnin, changing it to Seraphim upon entering a rnonastery at Sarov in 1777. Ordained in 1793, he soon embarked upon an eremitical life in a solitary hut in the forest near the abbey, resided for a time upon a pillar, and later was walled up. After twenty-five years, he once more entered the world owing to a mystical vision which he attributed to the Virgin Mary. He soon attracted disciples and followers who came from far and wide to receive his counsel and to partake of his spiritual program of contemplative prayer, monastic-like austerities, and rigorous self-discipline. The Russian Orthodox Church canonized him in 1913, and his teachings have been the source of many books, making him well-known in the Western Churches.