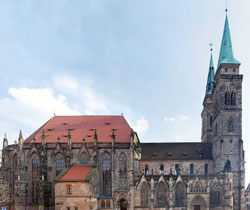 Hermit, missionary, and a patron saint of Nuremberg. Most likely an Anglo-Saxon from England, he arrived on the Continent and became a hermit near Vicenza, Italy, and then participated in the missionary enterprise of the times, assisting in the work. of St. Willibald in the Reichswald. Many miracles were attributed to him, including turning icicles into firewood.