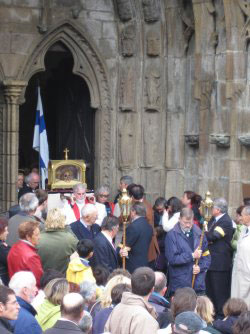 Welsh monk and bishop, called Pabu (Father) among the Bretons and sometimes listed as Tugdual. Originally a monk in Wales, he journeyed to Brittany, France, with his mother, sisters, and other relatives. The Celtic language of Brittany was easily understood by Welsh speakers. Tudwal’s cousin, Deroc, was a king of Dumnonia and he worked to promote the faith in his cousin’s domain, founding Lan Paku at Leon, Spain. He eventually became bishop of Treher (Treguier) with King Childebert I (r. 511 -558) as his patron. He is remembered in Wales in several sites in the Leyn Peninsula.