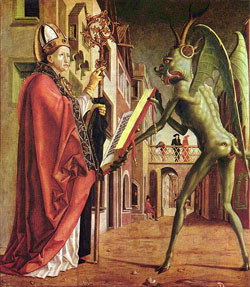 Theophilus the Penitent (sixth century) + Archdeacon and diocesan administrator in Adana, Cilicia (modern Turkey), who was offered the bishopric but declined out of humility. When the appointed bishop unfairly deposed him from his post, he grew so angry that he made a pact with the devil. Repenting of his sin, he prayed to the Virgin Mary and awoke the next morning to find upon his chest the devilish pact. He immediately made a public confession, performed sincere penance, and had the bishop burn the contract before the assembled congregation. While this legend is fanciful, Theophilus is an historical figure, quite popular during the Middle Ages. The legend served as the basis for the later Faust theme so brilliantly developed by Christopher Marlowe and Goethe.