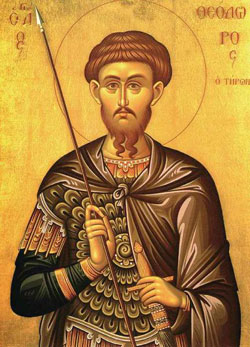 Roman martyr, considered to be virtually identical with St. Theodore Stratelates. According to custom, he was a recruit (tiro) in the Roman army at Pontus, on the Black Sea. After refusing to participate in a pagan ceremony, he was brought before the tribune of the legion and the governor of the region. Freed temporarily, he immediately went out and set fire to the temple of Cybele near Amasea in Pontus. For this crime, he was burned to death in a furnace. Beyond the legend of his martyrdom, little is known with certainty of his death. Nevertheless, he was greatly venerated in the Eastern Church as one of the three "Soldier Saints," with George and Demetrios.