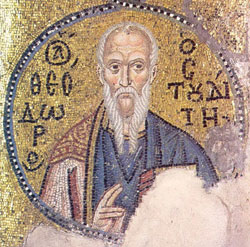 Also Theodore of Studiurn and Theodore of Studios, abbot, monastic reformer, and ardent enemy of iconoclastic policies in the Byzantine Empire. The nephew of St. Pluto, abbot of Saccudium (a monastery in Bithynia, Asia Minor, nenr Mt. Olympus in modem Turkey), he studied under his uncle and entered the community about 780. In 794, he followed St. Pluto as abbot when his uncle abdicated in his favor. Theodore soon distinguished himself for his opposition to the adulterous marriage of Emperor Constantine VI (r. 780-797) and was banished until 797 when the emperor was deposed by his mother, Irene.Two years later, Theodore moved the community from Saccudium to Studites in order to escape the growing influence of the Arabs. The monastery subsequently became one of the most prominent in the whole of the Eastern Church. In 809, Theodore was exiled once more, this time by Emperor Nicephorus I (r. 802-811), marking the start of suffering which continued unceasingly virtually until his death. Recalled in 811, he was forced soon after to speak out against the iconoclastic policies of Emperor Leo V (r. 813-820). In revenge, Leo had Theodore seized, cruelly abused, and exiled. Studites was populated by Iconoclast monks, and Theodore lived in banishment until 820 when Emperor Michael II (r. 820-829) brought him back to Constantinople. Theodore remained unbending and died without ever returning to Studites. He died just outside of Constantinople. Theodore was venerated for his personal holiness, his brilliant abilities as a preacher, and his willingness to champion the rights of the Church, even at the price of deep personal sacrifice. He was also the author of five hundred letters, hymns, sermons, polemics against Iconoclasm, and two cathechisms.

Hi readers, it seems you use Catholic Online a lot; that's great! It's a little awkward to ask, but we need your help. If you have already donated, we sincerely thank you. We're not salespeople, but we depend on donations averaging $14.76 and fewer than 1% of readers give. If you donate just $5.00, the price of your coffee, Catholic Online School could keep thriving. Thank you. Help Now >
Continue reading about St. Theodore of Studites