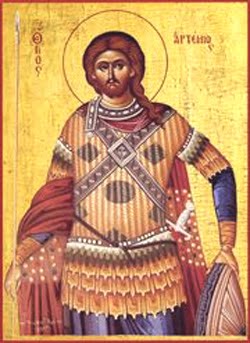 Cardinal Baronius inserted the name of St. Artemius in the Roman Martyrology, following the example of the Eastern church which had venerated him in spite of the fact that he was a supporter of the Arians. We are told that he was a veteran of the army of Constantine the Great who was made imperial prefect of Egypt. In discharging this office he had to be a persecutor as well as a heretic. George the Cappadocian had been intruded upon the episcopal throne of Alexandria by the Arian emperor Constantius, St. Athanasius had fled, and it was the duty of Artemius to find him, which he endeavored to do with great zeal among the monasteries and hermitages of the Egyptian desert; he also persecuted the orthodox in general. But Artemius was no less zealous against paganism, destroying temples and images, so that when Julian the Apostate became emperor the persecutor was in turn, persecuted. Many accusations against Artemius were made to the emperor, among others, that of breaking up idols; he was accordingly deprived of his property, and beheaded. Whether the Artemius whose healing shrine was a great center of devotion at Constantinople, was identical with this Artemius, the prefect of Alexandria put to death by Julian the Apostate, does not seem to be entirely clear. But the Greek life printed in the Acta Sanctorum, which is based ultimately upon the Arian chronicler Philostorgius, quite definitely assumes this. It also states that the emperor Constantius II commissioned Artemius to convey the refuted relics of St. Andrew the Apostle and St. Luke the Evangelist, from Achaia to Constantinople. His feast day is October 20th.