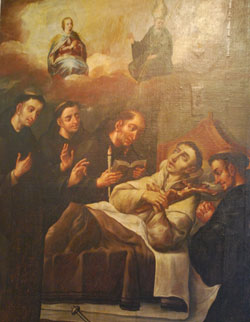 St. Salvatore of Horta (Feast day - March 18th) St. Salvatore is usually described as "of Horta" because he spent many years in the Franciscan Friary of that place. He was born at Santa Columba in the diocese of Gerona in Spain. He came of a poor family, and lost both his parents while still a child. Migrating to the town, he worked as a shoemaker in Barcelona. At the age of twenty, as his heart was set on the religious life, he became a Franciscan of the Observance. Employed in the kitchen, his virtue quickly matured in these humble surroundings, but he thirsted for greater austerity, and passed on, first to the convent of St. Mary of Jesus at Tortosa, and then to the solitude of St. Mary of the Angels at Horta in the same diocese. In that house of very strict observance, he made a protracted stay but eventually he returned to Barcelona, where his supernatural gifts attracted much notice, and where the blind, lame and deaf came to him to be healed. He always walked barefoot, scourged himself daily, and kept long and rigorous fasts. He was specially devoted to our Lady and to St. Paul who appeared to him on several occasions, notably on his death-bed. St. Salvatore had gone to Sardinia in compliance with the orders of his superiors when he was seized with an illness which proved fatal. He died at Cagliari, being forty-seven years of age, in 1567. He was venerated as a saint during his lifetime and was eventually canonized in 1938.