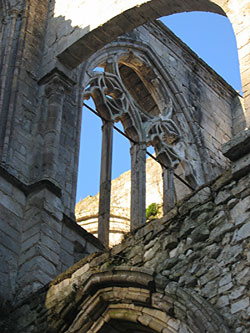 Benedictine abbot, also called Wandregisilus and Vandrille. Born near Verdun, France, to a noble family and related to Blessed Pepin of Landen, he was sent to the court of the Frankish king Dagobert I (r. 629-639) of Austrasia (parts of modern Germany and France). There he wed in accordance with the wishes of his family. In 628, after a pilgrimage to Rome, he and his wife separated by mutual agreement so that each could enter the religious life. After living for a time as a hermit, he entered the Benedictine monastery of Montfaucon, in Champagne, France, where he lived for ten years. Wandrille then left the abbey to become a hermit at St. Ursanne, Jura. He then went to Roumain-Moutier, where he was ordained. He founded the monastery of Fontenelle, in Normandy a school as well as what was to become a leading missionary center and one of the respected monastic institutions of France.