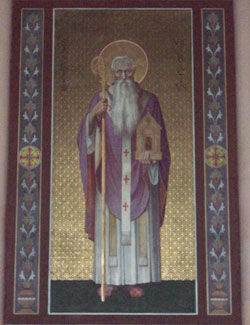 Bishop and missionary. The son of a Roman legionnaire, he set out on a military career. After becoming a Christian, he refused to remain in the legions. Flogged and sentenced to death for remaining adamant in his refusal to return to the army, he somehow avoided execution and received a discharge. Victricius became a missionary among the tribes of Flanders, Hainault, and Brabant, Belgium, and later the bishop of Rouen, France (about 386). Owing to his reputation for goodness and being a capable prelate, he journeyed to England in 396 to assist in the settlement of some dispute among the bishops there, although in his later years he was accused of heretical leanings. Not only was he exonerated by Pope St. Innocent I (r. 401-417), but he received from the pope the important decretal of the Liber Regularum. He was also the author of the work The Praise of Saints.