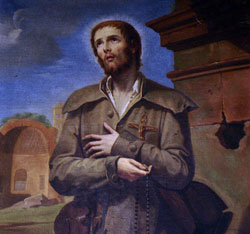 Called "the Beggar of Rome," a pilgrim recluse. He was born in Amettes, France, on March 25, 1748, the eldest of eighteen children. Studying under his uncle, a parish priest, at Erin, France, Benedict tried to join the Trappists, Carthusians, and Cistercians but was refused by these orders. In 1770, he made a pilgrimage to the major shrines of Europe, settling in Rome in 1774. There he lived near the Colosseum and earned fame for his sanctity. Benedict was devoted to the Blessed Sacrament and attended the Forty Hours devotion in the city. He died in Rome on April 16, and was beatified in 1860. He was canonized in 1883.