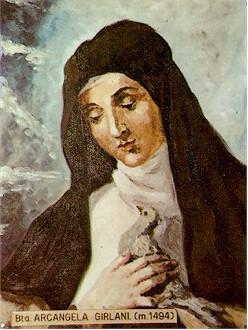 Carmelite mystic. She was born in Trino, in northern Italy, in 1460, baptized Eleanor. Though planning to become a Benedictine nun, she was thwarted in her desire by her horse - the animal refused to carry her to the convent. She then became a Carmelite in Parma, Italy, taking the name Archangela, being professed in 1478. Named prioress of the convent, Archangela founded a new Carmel in Mantua. She was gifted with ecstasies and levitation and was reported to have performed miracles. Archangela died on January 25,1494, and her cult was confirmed in 1864.