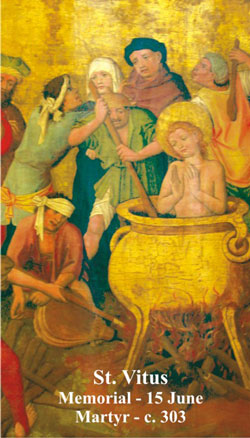 Unreliable legend has Vitus, the only son of a senator in Sicily, become a Christian when he was twelve. When his conversions and miracles became widely known to the administrator of Sicily, Valerian, he had Vitus brought before him, to shake his faith. He was unsuccessful, but Vitus with his tutor, Modestus, and servant, Crescentia, fled to Lucania and then to Rome, where he freed Emperor Diocletian's son of an evil spirit. When Vitus would not sacrifice to the gods, his cure was attributed to sorcery. He, Modestus, and Crescentia were subjected to various tortures from which they emerged unscathed, and were freed when during a storm, temples were destroyed and an angel guided them back to Lucania, where they eventually died. So much for the legend. What is fact is that their cult goes back centuries and that they were Christians who were martyred in Lucania. A great devotion to Vitus developed in Germany when his relics were translated to Saxony in 836. He is one of the Fourteen Holy Helpers and is the patron of epileptics, those afflicted with St. Vitus' Dance (named after him}, dancers, and actors, and is a protector against storms. Feast day - June 15th.