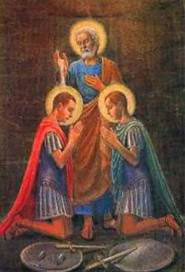 So often we hear people, or even ourselves, excuse an action by saying "I was only following orders." But for Nereus and Achilleus this excuse could not stand in the face of the cross.

Everything we know from authority about these two first-century martyrs comes from a testimony written by Pope St. Damasus in the fourth century and inscribed on a memorial tablet that commemorates their lives. But even this commentary comes 300 years after they died.

Damasus tells us that Nereus and Achilleus were soldiers in the Roman army where they helped carry out the persecution of Christians. They probably had nothing against Christians and didn't care for the bloody slaughter they were commanded to perform, but they obeyed these cruel orders out of fear of dying themselves. After all, carrying out orders was what soldiers have always been expected to do.

We are not told how they were converted, only that it was a "miracle of faith." After this miracle, they threw down their weapons and escaped from their camp, discarding armor and arms as they went toward their new life in Christ. As participants in the persecution they knew perhaps better than any other Christian what pain awaited them. Faith, however, had triumphed over fear of death and the victory of faith was the sweetest they had known.

We are told they were martyred but Damasus doesn't mention how.

Later legend had it that they served Flavia Domitilla, the great-niece of Emperor Domitian, and were exiled and executed with her when she converted. This legend probably originated in the fact that the martyrs were buried in what was later known as the cemetery of Domitilla.

Saints Achilleus and Nereus, pray for those in the military and armed forces throughout the world that they may always see God as their authority and obey God's orders first. Amen