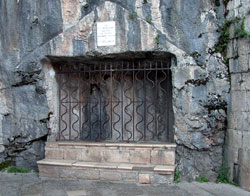 Hermit of legend, also called Amator. Tradition records that he was a servant in the house of the Holy Family. He is supposed to have married St. Veronica, going with her to Gaul (modern France) where they spread the Christian faith around Bordeaux. Amadour is also recorded as having gone to Rome to witness the martyrdom of Sts. Peter and Paul. He returned to Gaul and after the death of St. Veronica he became a hermit at Quircy, France, where he built a shrine to the Blessed Virgin Mary. A shrine called Rocamadour did exist and was a great pilgrimage site at one time.