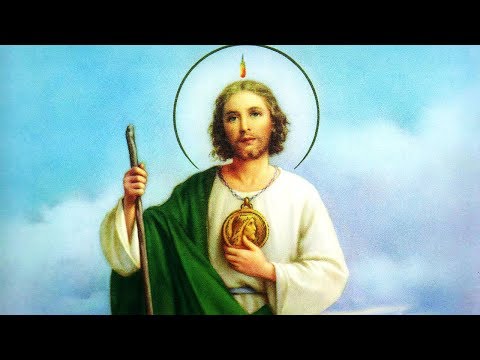 St. Jude, known as Thaddaeus, was a brother of St. James the Less, and a relative of Our Saviour. He was one of the 12 Apostles of Jesus and his attribute is a club. Images of St. Jude often include a flame around his head, which represent his presence at Pentecost, when he accepted the Holy Spirit alongside the other apostles. Another attribute is St. Jude holding an image of Christ, in the Image of Edessa.

Sometimes he can also be seen holding a carpenter's ruler or is depicted with a scroll or book, the Epistle of Jude.

Biblical scholars agree St. Jude was a son of Clopas and his mother Mary was the Virgin Mary's cousin. Ancient writers tell us that he preached the Gospel in Judea, Samaria, Idumaea, Syria, Mesopotamia, and Lybia. According to Eusebius, he returned to Jerusalem in the year 62, and assisted at the election of his brother, St. Simeon, as Bishop of Jerusalem.

Saint Jude is not the same person as Judas Iscariot, who betrayed Our Lord and despaired because of his great sin and lack of trust in God's mercy.

Jude was the one who asked Jesus at the Last Supper why He would not manifest Himself to the whole world after His resurrection. Little else is known of his life. Legend claims that he visited Beirut and Edessa and could have been martyred with St. Simon in Persia.

He is an author of an epistle (letter) to the Churches of the East, particularly the Jewish converts, directed against the heresies of the Simonians, Nicolaites, and Gnostics. Though Saint Gregory the Illuminator has been credited as the "Apostle to the Armenians," the Apostles Jude and Bartholomew are believed to have brought Christianity to Armenia, where Jude was rumored to have later been martyred.

There is some debate about where Jude died, though most Biblical scholars agree he was martyred. He is believed to have been martyred either in Armenia or Beirut.

Following his death, St. Jude's body was brought to Rome and left in a crypt in St. Peter's Basilica. Today his bones can be found in the left transept of St. Peter's Basilica under the main altar of St. Joseph in a tomb he shares with the remains of the apostle Simon the Zealot.

Pilgrims came to St. Jude's grave to pray and many reported a powerful intercession, leading to the title, "The Saint for the Hopeless and the Despaired." Two Saints, St. Bridget of Sweden and St. Bernard, had visions from God asking them to accept St. Jude as "The Patron Saint of the Impossible."

Roman Catholics invoke St. Jude when in desperate situations because his New Testament letter stresses that the faithful should persevere in the environment of harsh, difficult circumstances -just as their forefathers had done before them; therefore, he is the patron saint of desperate cases.

The Chicago Police Department and Clube de Regatas do Flamengo - the Rio de Janeiro soccer team - have made Saint Jude their patron saint and there are several hospitals who have also accepted him as their patron saint, including the well-known children's hospital St. Jude Children's Research Hospital in Memphis, Tennessee.

There have also been several sites across the world dedicated to the Apostle Jude, including shrines and churches. The National Shrine of Saint Jude was founded in 1955 and can be found in England.

When Jude was mentioned in the Bible, it was often in relation to James (Jude of James) which is traditionally interpreted to mean "Jude, brother of James" as in the King James version of Luke 6:16; however, "Jude, son of James" appears in Protestant translations such as the NIV, NIRV, and the New King James Version. The same discrepancy occurs in Acts 1:13.

In John 14:22, a disciple called "Judas not Iscariot" is assumed to be the apostle Jude, though critics believe it is too ambiguous to believe it is a certainty.

When the apostles are listed in Matthew 10:3 and Mark 3:18, Jude's name does not appear but "Thaddeus" does. This occurrence led early Christians to believe Jude was known as both "Jude" and "Thaddeus," the latter of which could have been a sort of nickname.

"Thaddeus" may have become a popular nickname for Jude following Judas Iscariot's betrayal. To add further confusion to Jude's second name, the name Thaddeus is often indistinguishable from Thaddeus of Edessa, one of the Seventy Disciples.

A popular Roman Catholic prayer to Saint Jude is:

"O most holy apostle, Saint Jude, faithful servant and friend of Jesus, the Church honoureth and invoketh thee universally, as the patron of hopeless cases, and of things almost despaired of. Pray for me, who am so miserable.

"Make use, I implore thee, of that particular privilege accorded to thee, to bring visible and speedy help where help was almost despaired of. Come to mine assistance in this great need, that I may receive the consolation and succor of Heaven in all my necessities, tribulations, and sufferings, particularly (here make your request) and that I may praise God with thee and all the elect throughout eternity.

"I promise thee, O blessed Jude, to be ever mindful of this great favour, to always honour thee as my special and powerful patron, and to gratefully encourage devotion to thee. Amen."

The Novena - a prayer said nine days in a row - to Saint Jude is:

"Apostle and Martyr, great in virtue and rich in miracles, near kinsman of Jesus Christ, faithful intercessor for all who invoke thee, special patron in time of need; to thee I have recourse from the depth of my heart, and humbly beg thee, to whom God hath given such great power, to come to my assistance; help me now in my urgent need and grant my earnest petition. I will never forget thy graces and the favors thou dost obtain for me and I will do my utmost to spread devotion to thee. Amen."