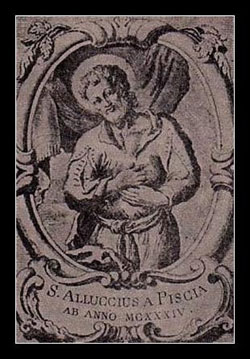 Allas giver, founder, and miracle worker. He was a shepherd in Pescia, Tuscany, in Italy, when he became the director of the almshouse in Valdi Nievole. Allucio also built shelters in mountain passes and at rivers. The group with which he worked became the Brothers of St. Allucio. A miracle worker known throughout the region, Allucio ended the war between the city states of Ravenna and Faenza.